We’re quick to condemn people’s actions in a time of war when we are mere bystanders to the event. In 1999, director Elia Kazan was awarded an honorary Oscar, which sparked dissidence in Hollywood. Industry big wigs refused him a standing ovation due to his cooperation with the House on Un-American Activities 47 years earlier, wherein he had named colleagues suspected of communist leanings; hence, terminating the careers of actors Art Smith and Morris Carnovsky and playwright Clifford Odets. In a press conference, Kazan defended himself by explaining he had opted for the less opprobrious of two options presented to him. What those options were is pointless. The point is that the Cold War perpetrated rancor and suspicion among Americans, largely bolstered by anti-red propaganda. (An ad for Scott paper towels warned that rough wipes in a company restroom were indicative of capitalist abuse culpable of turning employees into Bolsheviks.) We can therefore presume that the taut times led to drastic measures; those subpoenaed to take the testimonial stand must have done so under the pressure of a threat.

The French movie “Diplomacy” (2014) depicts an analogous instance. Based on true events of World War II, it pits German general, Dietrich von Choltitz (Niels Arestrup), against Swedish diplomat, Raoul Nordling (André Dussolier). Paris is at stake. The Nazis are retreating, and as a middle finger to the Allied Forces, Hitler has commanded von Choltitz to push buttons that would blow up the city. Nordling implores the general to reconsider, utilizing psychological strategies to appeal to his compassion for life and history. Families murdered, monuments crumbled, a civilization annihilated… von Choltitz assures Nordling that all this burdens his conscience. Why then obey the Führer? The dictator holds the general’s family hostage. Although both of the above pertain to historical occurrences, they are our stories, as well. War need not be exclusive to either politicians and soldiers or courtrooms and battlefields. Just as with feuding nations, we can’t be too sure of what we are capable in a circumstance that involves the beloved. My cousin, Liza, died of cancer well tended to; her husband, John, comforted her through chemotherapy and promised to fulfill her last wishes. (http://www.rafsy.com/films-2000s-present/me-and-earl-and-the-dying-girl-everyones-loss/) Such faithfulness is the prescription for a big screen romance, and two films of the same title, “Coming Home,” screened 38 years apart (1978 and 2015) and from two different countries (The United States and China), pay obeisance to this, each with a plot distinctly its own; the Vietnam War is the backdrop to the early film and the Cultural Revolution to the later.

In the 1978 feature, Sally Hyde (Jane Fonda) is a military wife whose husband, Bob (Bruce Dern), has been called to action in the Far East hotbed of napalm and stifling swamps. Alone in California, Sally volunteers at a veteran hospital, where she meets Luke Martin (Jon Voight), a soldier recuperating from wounds that have made him a paraplegic. As their friendship develops into something more, Bob returns. He suffers from post-traumatic stress. Sally faces a dilemma: happiness with Luke or fidelity to Bob in order to heal him of his condition? Lu Yanshi (Chen Daoming) in the 2015 story is a dissentient to Chairman Mao. He comes home to wife, Feng Wanyu (Gong Li), after ten years in a labor camp, where he had been detained for political rehabilitation. Both await the reconciliation, only an accident during Lu’s imprisonment has damaged Feng’s memory. She doesn’t recognize her husband. To revert her amnesia, Lu reads letters he had written to her from his cell, all of which she has stored in a chest, and plays on a piano songs that bear special meaning to them both, day after day for time indefinite.

My cousin’s husband has since remarried. The journey back to a serene existence hasn’t been smooth. John’s second wife, Wendy, is ill. “It’s like reliving a nightmare,” John said this past weekend during a visit to San Francisco. Within six months of their marriage two years ago, the condo they moved into poisoned Wendy with mold infection. While the sickness is curable in 95% of its victims, she belongs to the 5% that don’t respond to treatment. As a result, her senses are heightened, causing bright light and noise to burden her eyes and ears; high altitude constricts her breathing; and food spices induce vomiting. On some days, she is so enfeebled that she’s bedridden. So that he can watch over his wife during the day, John works on his entrepreneurial projects in the evenings. Regardless, he maintains an upbeat attitude (“What can you do? That’s how it is.”), hopeful that the next doctor will provide the breakthrough.

“That’s love,” I told my nephew, Rafael. All those present in the living room consented. Love stories surround us. A friend, Rafael P, is caregiver to an ex-boyfriend who is in stage four of cancer, feeding Jeff meals and changing Jeff ‘s sheets on occasions that he messes his bed, while another friend, Joe, has tightened bonds with his partner, who is nursing him through short-term memory loss and limited mobility, the aftereffects of a brain tumor operation performed a year and a half ago. My own mother is now wary about solo trips to San Francisco because of my father’s crippling knee problems and arthritis. To walk, he needs a cane in one hand and the support of an arm in the other, and he has difficulty putting on his socks and shoes. I told my mother that he wouldn’t like it if we were to make him feel as an invalid through constant vigilance. “Of course, he wouldn’t,” she said, yet a fact is a fact. “Still, he can’t be left alone.”

My nephew, Rafael, said about his girlfriend, “I don’t know if I’d be able to do the same for Kelly.” I responded that he could never know. None of us could, for a flip side exists to every position as it does in a war. My sister knew two guys in college, Paul and Jim, who were a couple and continued on as such after graduation, until Paul’s health deteriorated from a brain tumor. As it did for Joe, a surgery impaired his movement, causing Jim to break off their relationship. I read that a similar scenario happened between two men who, in the 1990s, were big names in the gay media on account of their physiognomy and sexual prowess, assets that Colt Studios, a company dedicated to the promotion of superior-caliber physiques, recorded on film. True to the title of their video, “Muscle Ranch,” Jake Tanner and Ed Dinakos were thoroughbreds that boasted ripped abs and Hercules thighs. Then AIDS took its toll on Ed, and Jake left. 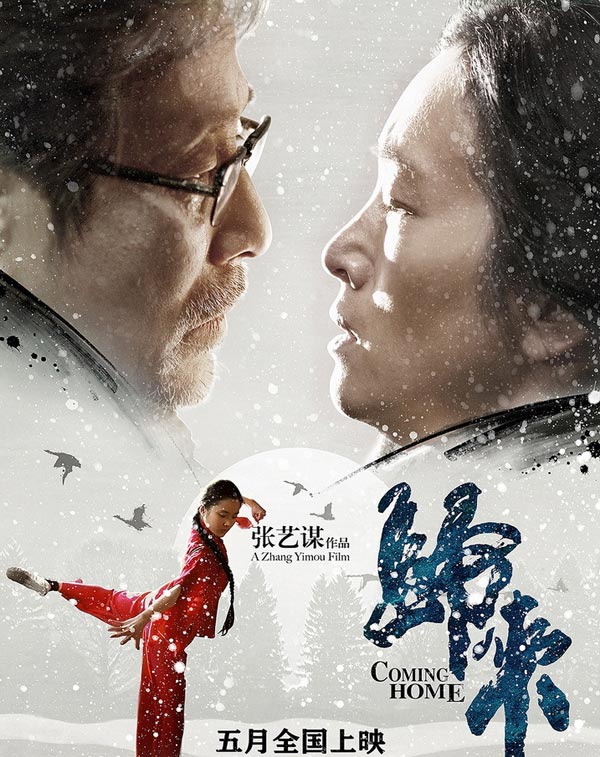 I am not here to make assumptions on Jim and Jake. I am not an insider to their decisions, and what I relate of them are secondhand accounts. I cite the two to underline that we can never accurately foresee how rough a going can get. Only when we are experiencing it can we fathom the full oppressiveness of the situation. Should we quit, would we be committing an egregious act? Nobody chooses to be ill as much as nobody chooses to be a victim of a war. Nevertheless, things happen. When they do, heroes are born. We extol them. We convince ourselves in our moments of peace and health that, in hardship with a loved one, we will hold the likes of John and our devoted spouses in “Coming Home,” Sally Hyde and Lu Yanshi, as examples to follow. But the truth is in my nephew’s statement: “ I don’t know…”