Bountiful is a rural town in Texas that has been destroyed by the Depression. A lone house hunches on a turf as expansive as the sea. The walls are decayed. Windows and doorways reveal a hollow interior. Whose flesh once touched this skull of a habitation? Whose soul served as its eyes and ears? To imagine a young person old is difficult just as it is to imagine an old person young. And yet, imagine we do. With fragments of bones, that they constituted the physical foundation of a life is inconceivable. We see disintegration, ash, and emptiness. This house could never have been a home, a safe lair of painted stairs and a roof radiant with the reflection of the sun, of voices and footsteps animating its rooms. A tomb-like silence enshrouds the structure.

But the house isn’t entirely dead. It will never be. For whatever time she’s got left, Carrie Watts (Geraldine Page) holds the house sacred to her heart as a vessel of breath and light. Carrie is an elderly woman in Houston under the care of her son, Ludie (John Heard), and his wife, Jessie Mae (Carlin Glynn), neither of who understand her longing to return to her roots. The two have concerns of their own. Ludie agonizes over a promotion as an office manager. Jessie Mae highlights her days by gossiping with friends at the drug store. A night out involves a movie. Such is the existence for working class citizens in Truman-era America. The city provides upward mobility and diversions, reasons to dream. So when Carrie begs them to take her to Bountiful, a place that she describes as eternally verdant, where flowers and fruits sprout upon a single raindrop, they tell her to hush, that she should bury these visions; they belong to the past. The future is in Houston. Of course, Carrie is aware of this. What the two youngsters don’t realize is that her dreams are comprised entirely of the past. Coins in a pouch, a pension check tucked in a purse, she runs away and buys a bus ticket for “The Trip to Bountiful” (1985). 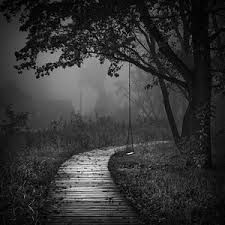 Picture Carrie Watts: plump on the bosom and heavy on the hips; cotton candy sleeves on a floral-patterned frock; a straw hat; gray eyes that gleam with memories on a face a map of folds and wrinkles. She could be any old lady in our own family. She could be my grandmother. When Grandma Susan had an aneurysm, her mind rapidly declined. She forgot names, didn’t recognize the faces of her children and grandchildren. Towards the end, bed-ridden, she would gaze at the ceiling and mumble. “How eerie,” my sister-in-law, Margie, said. “I suppose that happens to all of us when we get to be that age.” We could only guess at the images and words Grandma Susan saw that hovered above – a visitation, a summoning from a greater force, God, prayers. And then one day, she mentioned a name, that of a girlhood friend.

My grandmother had grown up on a hilltop province. Houses of stone and wood line dirt roads. A blackish-gray behemoth of a church with plants that grow from fissures dominates the square. In the outskirts, a creek runs through a sylvan. My aunt, Tit Tessie, laughed. “She’s remembering herself at 13,” she said of Grandma Susan. “She would play in the creek with her friend.”

As children, we are ignorant of the notion of time and memory. Souvenirs bear no importance to us because we believe that today will never pass. The year I turned 12 (1979), my father’s managerial position at the Bank of America required my father and his family to relocate from Manila to San Francisco. In cleansing out my closet, I discarded a mishmash of items from a desk calendar of hand painted flowers to a Bionic Man doll, from a collection of Hardy Boys and Nancy Drew books to Sanrio goodies. Two things I regret having disposed of: a pair of caricature sketches of me drawn during a visit to Europe. One depicted me as an Asian Goofy with tombstone teeth, oblique eyes, and a neck wiry long. The other presented my profile, a sesame ball rotund head atop a stump of a neck. They were done in Copenhagen, within minutes apart from each other. Since I was displeased with the first, my father had taken me to another caricaturist across the square. I tucked in my neck and suppressed my smile so that what I got upon the second attempt was an image of pure corpulence.

My heart sunk the way it does when, brimming with excitement, we unwrap a big box on our birthday only for the box to contain math books. I don’t know what I had expected. A glamour portrait, perhaps. Our European vacation was in 1975, and for years afterwards, the caricature sketches were stashed rolled up in my drawer. Then off they went to the garbage. If they could materialize before me at this instant, I would frame them. Over 40 years later, they are as precious as photo negatives, testimonies of a moment relegated to the remote past.

The avidity to preserve applies to every castle we have dined in and loved, slept in and dreamed, presided over as master. In grieving for what Ludie and Jessie Mae regard as nothing more than a ramshackle house, Carrie Watts in “The Trip to Bountiful” grieves for a period long gone when the laughter of all those dearly departed reverberated through its hallways. The singular person who sympathizes with her is a stranger she befriends at the bus depot. A young bride whose husband has gone off to fight in the Korean War, Thelma (Rebecca de Mornay) prays day in and day out against the threat of loss.

Human ephemerality hit me hard when I turned 20. (http://www.rafsy.com/films-2000s-present/ill-see-you-in-my-dreams-a-golden-renaissance/) So evanescent was the present that I started a journal in which I recorded not only the date of each entry, but also the day and the time right down to the precise minute, as if by doing so I could freeze the now. I was barely 23 when already I wept for the passing of my youth through the manifold addresses that identified me with the stamp of a social security number:

120 West Hall. 2 Wren Hall. 6 Rue Emile du Bois. 280 Harvard Street. 4 Trowbridge Place. 10 Dana Street East. Each place for a point in my life was home, and each place I had to leave to go on with life. There’s something sad about leaving a place. It’s like saying to yourself, “This is it. There’s no looking back, even if what’s back there is simply great. Move forward because only in moving forward can I progress.” You leave behind the life you had while living there, and you leave behind friends and a part of your youth.

I have resided in four addresses since, the current and longest being 1170 Sacramento Street in San Francisco. My parents purchased the condo the summer of 1990 towards the end of my second year in Paris, where I had gone to be a writer after graduating from Tufts University. The condo is on the fifth among 17 floors of a building that stands the tallest on Nob Hill. I have a balcony view of naked fountain cherubs in Huntington Park; the Gothic twin towers of Grace Cathedral; and the Fairmont Hotel, a construction that recalls a Gilded Era Vanderbilt mansion. I will never forget my reaction when I first walked into the unit: “Wow!” Layers of personal history have since accumulated: my coming out, my mother’s month-long visits that led to tiffs over my late nights of partying, and Grandma Susan’s 75th birthday.

My friend, Doug, hit the nail on the head when he said, “The day you empty these rooms and pack up to move somewhere else, it will be a very emotional experience.”