Love means never having to say you’re sorry. False. On the contrary, an apology is perhaps the most underrated virtue in the history of humankind. If Republicans and Democrats could be rueful for their obstinate mudslinging, then our country would be less fractured. Donald Trump could redress his atrociousness by retracting his insults at John McCain, Mexican immigrants, and everyone else at whom he wags his finger. All my bed buddy, Joshua, has to do to amend the rift between us that his standing me up last October caused is to ask my forgiveness. (http://www.rafsy.com/films-2000s-present/two-lovers-so-close-and-yet-so-far/) Fat chance of any of this happening. We find it easier to say “I love you” than “I’m sorry,” and as it is, declaring the L word requires more than a modicum of guts. Only a tearjerker such as “Love Story” (1970) can justify the aphorism. It has become such a pop culture catchphrase that we can simply guess at how many relationships that have adhered to it have (or have not) actually avoided breakups. 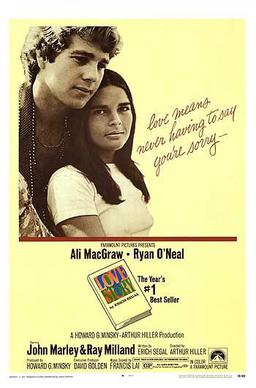 Meet our young twosome. Jenny (Ali MacGraw) is a Radcliffe coed of blue-collar, Italian stock who marries Harvard jock, Oliver (Ryan O’Neal), a blue-blooded Bostonian. Other than a difference in class and heritage, which Jenny incessantly reminds us of with her pejorative use of “preppy” on her husband, there’s nothing exceptional about the couple. It’s right that they should be attracted to one another. In addition to blond curls and a face the cinematic version of Michelangelo’s David, Oliver is a nice guy who is hammering away towards a diploma and a subsequent career in law, all under the pressure of severance from the Barrett fortune due to his choice of a wife. Jenny is pretty in a Catholic schoolgirl way, and though insecure of her social standing next to an heir, she is self-assured in where her intelligence can take her, working as a teacher to fund Oliver’s tuition. He lives up to his potential. She tempers her sauciness with sweetness. Even though a doctor informs them that Jenny can’t bear kids, that’s all right because Oliver has got a trip to Paris lined up. The two vanquish every blow that’s hurled their way. Such is the power of love. Indeed, Oliver and Jenny have nothing to be sorry for. And then comes the ultimate blow: cancer.

As Jenny lies dying, she maintains a tough disposition. She upbraids Oliver his helplessness, the regret that shrouds his face over the state she has atrophied to. “It’s not your fault,” she says. Of course, it isn’t. It’s cancer, not syphilis. When outside the hospital Oliver Sr. (Ray Milland) seeks to reconcile with his son via an apology, junior silences the man with that famous line Jenny first utters during a spat one snowy night when they are yet unmarried and confident of a long, rewarding journey ahead. Never having to say you’re sorry could mean that when love is truly present, the remorse we convey through actions should speak louder than words. Still, there’s a reason we humans possess the gift of language, and while a bouquet of roses or the offer to front the medical expense of a sick daughter-in-law could aid to heal a festering wound, the sincerity of the S word is a potent remedy, as my own father has substantiated. “Maybe one day, I will be able to tell her I’m sorry,” my father said to his brood over  Christmas dinner a few years ago about an incident from his boyhood. He was 11 when it happened, and over 70 years later it continues to tug at him for the lone reason that he never apologized to his mother. Grandma Antonia sewed him a shirt, a rarity of a gift since he came from a poor background. His own father died when he was five, leaving him to assist in providing for the family, first as an aid to fishermen (his payment was a fish) and then as a newspaper and cigarette vendor. In school, during his first outing in the shirt, my father tore off the buttons. “I don’t know why I did that,” he said to us. “Maybe I didn’t like the way the shirt fit or the color of it. Anyway…” My grandmother was crushed. Upon his return home, she grieved for the shirt, having toiled over it day and night so that he’d have something nice to wear to school. “Hijo, pinaghirapan ko iyan, umaga at gabi, para lang mayroon kang makakasuot na maganda sa escuela. Bakit?” Why, she asked, and she proceeded to mend the buttons back on. My father has never forgotten the look on her face, this injury to the heart, and all because of him. Grandma Antonia has been dead for over a decade. She died in a fog of dementia, the incident obliterated from her memory. Perhaps it had never left an impact on her. Regardless, it has on my father so that in the winter of his years, he still believes she will pardon him. “When we meet in heaven,” he said.

Now trust me on this one: when you are the recipient of an apology, it’s a gift, one that validates not only your beauty as a human being, but also that of the giver. Over lunch a few years ago, my brother expressed his pride for his children, four sons who then ranged in age from three to 18. “Sometimes, though, they can pick on each other and say stupid things, just like the stupid things I used to say to you.” I looked at him questioningly. “I’m sorry about that,” he said. “Don’t worry about it,” I said. “We were kids.” He said, “I know. Still, I’m sorry if I hurt you.” My brother used to malign me my effeminate mannerisms, sometimes underscored with a fist, and although his words could be wounding, they never traumatized. Punches and revilements notwithstanding, we’ve always been a close family, so even as a boy and through my teens, I was already aware that the differences between my brother and me would come to pass. However, I neither willed for nor anticipated an apology. That my brother brought it upon himself to give me one when bygones had already been bygones long ago elevated, in my eyes, his status as a man. He could not have apologized had he never endured his own measure of failures and heartaches. In this single moment, he revealed himself to be humbled by life.

Of course, I’ve got my own compunctions. Here’s one the arrogance of youth incurred. I told a grocery owner when I was a student in Paris that his existence was pathetic. This because he gestured with a finger to his head to a woman in line behind me that I was a dodo brain. Scrounging for coins in my pocket to buy bananas, I continuously miscounted the amount. After finally paying, I left the grocery in a huff, but I was so incensed that I returned to tell him off. He motioned with his hand for me to calm down. We should forget the ordeal, he said in French. He had a daughter and a son, both no older than eight, watching us through a window to a back room. The man was Middle Eastern of slight build and with a white beard that gave the impression he was older than he was, certainly older than a typical father of kids that age. In the modesty of the grocery – the shelves barely stacked with products and the drab walls – it was evident that he put his entire livelihood into the place, that here… in this small business barren of the stocks and bonds that characterize a major venture, in a country where Jean Marie Le Pen, leader of the National Front who was campaigning for a France free of immigrants… was where he set his hopes for his family’s future. Never mind his entreaty for peace or the witness of his children. I was determined. “Votre vie est pathetique,” I said, once, twice, thrice. He shooed me away. No problem because I had vented my anger. All these years later, I wonder if it was worth it, this gloating sensation for having gotten even. I can only wish that his progenies are thriving.

It’s admirable that Oliver and Jenny in “Love Story” are able to move past disagreements both big and small without having to say sorry. Hard feelings should never brew, for we human beings are flawed animals. Pardons should be granted with generosity. But if given the opportunity, it does no harm to utter the word. It’s only two syllables, and when enunciated with hand on heart, we could make the world one united family. 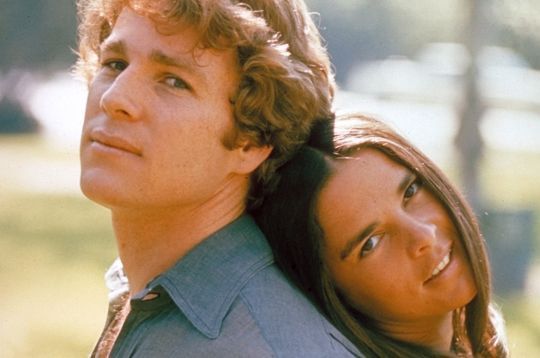