Hong Kong constitutes my earliest memory. When I was one, my father’s career with the Bank of America took him from Manila to the former British colony, where we lived in a building perched on a mountain that overlooked the ocean. Repulse Bay Beach was our playground. I can still see the tide rushing towards me, the crest carved in the form of foaming clouds fallen to the earth. I am lying stomach down on the shore, and a feeling I have not known before that is part excitement, part fear overwhelms me. Nothing can harm me, I think, because Daddy and Mommy are near. Yet the wall of water surging forth compounds my smallness in relation to nature.

Water was ever present in the formation of my mind. Over 40 years later, it floods me with memories that place and time rather than sequence link. I now sit on a bench onboard a yacht, my feet barely touching the floor, as my family joins the Normans in prayer for a storm that has stranded us out at sea to subside. Now my father, with a tone of factuality to his voice as if he were teaching me to count, points to cars in the basement garage that a hurricane turned over the night before. A tidal wave on TV mounts to the syncopated trumpets of “Hawaii Five-O.” My mother yanks me by the arm from a toilet. She laughs, not at my slipping into a commode, but at the two of us drenched in rain as we run downhill to a noodle stand.

Since memory starts at three, these remembrances encompass only one year. The memories that I have amassed ever since have added to the mélange to create me into the person I am today. Months intertwine – years, events, and people, too. They are the solar plexus of my consciousness. It would be impossible to subsist on a single memory, blithe as it is, yet that is the challenge “After Life” (1998) presents.

Director Hirokazu Kore-eda has a peculiar vision of what awaits us when we die. He doesn’t believe in hell, only in heaven. To get there, we must pass through purgatory – a snow laden landscape where stands a sole edifice that houses the departed. Gray and block-like, it has the stodginess of a bureaucratic office. No harps and angel choirs here. Counselors conduct the business of assisting its residents journey forward to eternity with one happy memory. One. The episodes of an individual’s life are stored on reels of film for him or her to view, and within a week the person must decide. An aged woman (Hisako Hara) chooses a plane ride with an infinite view of cherry blossoms. The gaiety of Disneyland’s Matterhorn obsesses a 12-year-old girl (Sayaka Yoshino). And for one man (Kotaro Shiga), happiness never existed. The counselors are faced with the task of inspiring all to search deep in their hearts for a memory redolent with a bliss deeper than the superficiality of one gained in an amusement park as well as to understand that life, no matter how deprived, possesses spurts of richness.

For all their expertise, the counselors are themselves the dead who cannot decide on their own singular memory. Takashi (Arata Iura) is a man in his twenties. Shiori (Erica Oda) is an 18-year-old girl. Like those to whom they offer guidance, Takashi and Shiori remain the ages that they were when they died. A new arrival is of special interest to Takashi. She is an elderly woman by the name of Kyoko (Kyoko Kagawa), who chooses as her cherished moment a farewell to her fiancé before he goes off to fight in the Pacific War. She is young and she smiles with hope beside him on a park bench. The sky is clear. Trees are alive with the singing of birds. 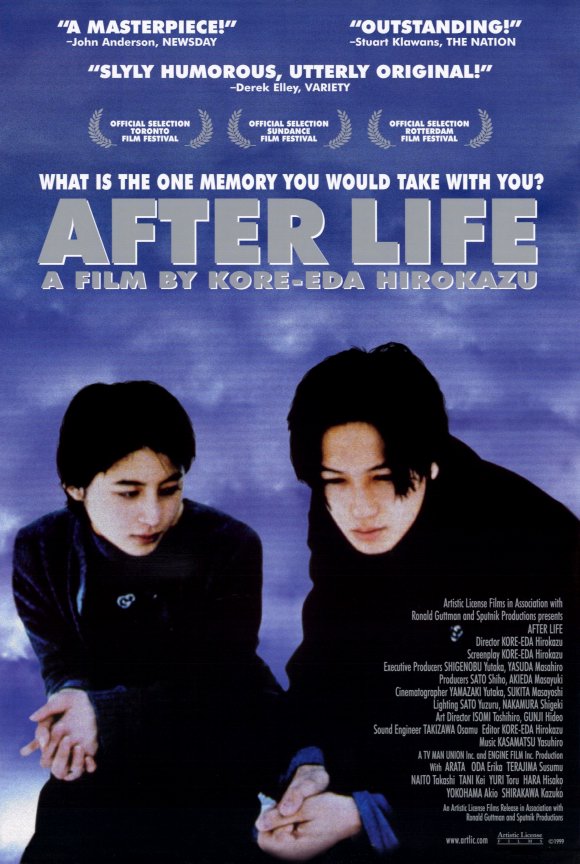 With every decision comes a sacrifice. Somebody is bound to get hurt. In this case, it’s Shiori. We know by the way she looks at Takashi that her feelings for him are more than platonic. Hers is a look not merely of wistfulness, but of anguish for the knowledge that, once Takashi singles out his memory so that he could enter the portal in the sky, it will be for him as though she had never been born.

It seems that oblivion is the fate of myriad splendors that enrich each passing day from birth to death. Certainly, we have memories we would like to expurgate because the events that produced them were unpleasant. “After Life” provides us with this possibility. Then again, we need to wonder if this is a wise move. We might as well will to change our history. I could wish that I had been looking where I was running that day in the school playground when I slammed into another boy and had my front teeth knocked out or that my brother hadn’t bullied me or that, to avoid what could have been a ship wreck, my family had not moved to Hong Kong. Grant me this wish, then I would never have experienced the gentleness with which a dentist held my hand or the sincerity of my brother’s apology (http://www.rafsy.com/films-1960s-1990s/love-story-love-means/), and I would not have the image I will hold dear to the end of my mother, in Capri pants and slippers, running in the rain with the joy of the provincial girl she once was.

How to select one memory to live forever? Takashi’s advice to Shiori is that in our search for happiness, we forget that knowing we were a part of somebody else’s happiness is also a blessing. That doesn’t make it any easier. What a tragedy it would be that in heaven I would not recognize many of my loved ones because I had chosen not to remember them.