“She’s a third-year girl that gripes my liver. You know, American college kids. They come here to take their third year and lap up some culture,” so derides Jerry Mulligan (Gene Kelly) of a young lady who has the temerity to talk shop about his canvasses, in French with the most abominable Yankee twang. He is “An American in Paris” (1951), an ex G.I. determined to earn a spot in the company of Pissarro and Degas. That could have been me – the nuisance of a third-year girl, I mean. For my junior year at Tufts University, my address was on the left bank of the Seine River, in the vicinity of the catacombs, an underground burial maze that dates back to the 5th century. To lap up culture was not my intention for residency in the Xanadu where Hemingway and Fitzgerald once battled wits. I was unhappy at Tufts. Being closeted was isolating, an impasse between me and everybody else, and the fraternity system, the nexus of the university’s social activities, was not my scene. I almost transferred to Berkeley, but opted for Paris instead because… well… it’s Paris. I was spoiled in Paris. No other way to put it. I declined the study-abroad protocol of living with a French family. I would have had to abide by a curfew every night and to partake in house chores. More inconvenient would have been the need to learn the language. (What little I picked up here and there sufficed.) I got a studio, and not on my own either. A man under my father’s employment at the French division of the bank where my father sat as CEO in the Philippines both coordinated with landlords who spoke English as well as accompanied me to every meeting so that he could handle the discussions. Although the American College, where I was enrolled at, could have assisted, I still would have been left to my own devices for the end result. Hence, I relied on Quito for everything – hooking up my phone, pointers on French lingo, disbursement of cash, home cooked meals. You name it.

If I did lap up culture, then it was an unavoidable coincidence. Paris is built on art and history. Literally. The whole continent of Europe is. I took courses that included in its curriculum field trips to the Louvre and the Tuileries Gardens and that brought me to Berlin, where the wall stood as an impenetrable demarcation between the West and the East. (http://www.rafsy.com/films-1960s-1990s/cabaret-come-blow-your-horn/) Spring break was in Russia when it was still called the Soviet Union, and tours to Loire Valley and Mont Saint Michel required us students to congregate at the school before sunrise. The bus ride out gifted us with a vision of Renaissance columns and pediments emerging from the darkness like treasure excavated in the light of a new day. Even when my eyes were shut, I couldn’t shun my surroundings. Such resplendence would lodge itself in my memory. A quarter of a century later, I had to write about it in a novel:

Paris is an outdoor museum. Films and photographs do not exaggerate the city’s splendor. Cathedral spires soar to the heavens to touch God’s fingertips. Edifices in the architecture of epochs past stand indomitable and ageless. Cobblestone side streets invite romance rather than danger. Contrary to common perception, I found the Parisians friendly. So long as I made an effort to ask for directions in French, they obliged. Young folks at the time were dressed in turtlenecks and blazers rather than in sweatshirts and sneakers. On nearly every block, I spotted a little lady carrying a little dog in a Louis Vuitton purse. 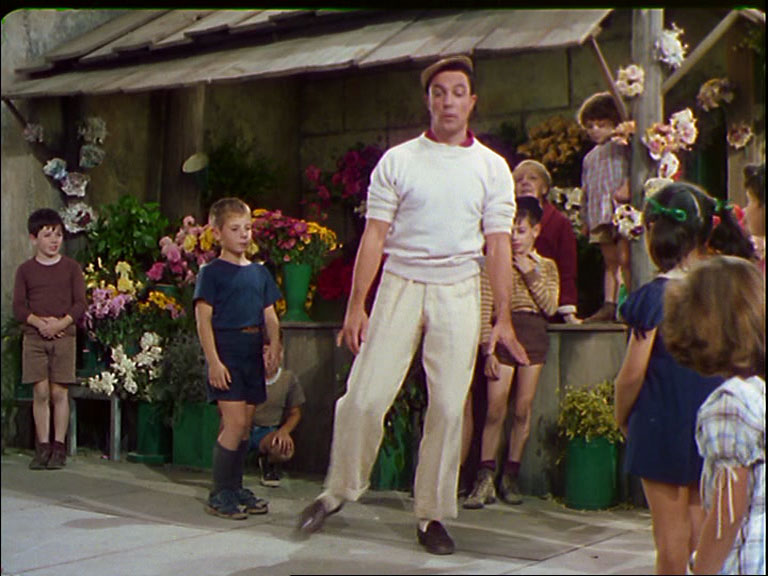 Starved for money as Jerry Mulligan is, he dresses in tailored tweeds and khakis, and with a grin characteristic of his Irish charm – all teeth and a twinkle in the eye – he claims every boulangerie and flower stall his territory with a song and a tap dance. It’s hard to be downbeat in Paris. On days when I’d find myself in a saturnine state, I’d think of where I was, as easy as that. One thing alone could shatter the spell. In any story where a heart sings, the silence of loss plays just as much a major role. Two women, Milo (Nina Foch) and Lisa (Leslie Caron), place Jerry in an awkward position. One is an American heiress who acts as an art patroness to buy his affection. The other is a French girl whom he decides upon first sight is “the one,” though she is betrothed to another.

Me, I liked a guy in my life drawing class. A grungy Norwegian in beat-up Converse and baggy pants, Aris was the epitome of the student artist – thin with blond hair long at the front that he’d flip back and a nose as prominent as much as his cheekbones were sharp. We rarely talked… in fact, we almost never did… so I can’t tell you why my crush. As Jerry expresses to Lisa when she bids adieu: “I came to Paris to study and to paint it because Utrillo did and Lautrec did and Rouault did. I loved what they created and I thought something would happen to me, too. It happened, all right. Now what have I got left? Paris. Maybe that’s enough for some, but it isn’t for me anymore because the more beautiful everything is, the more it’ll hurt without you.”

That’s what Paris does. It rouses our passions and longings. All those masterpieces and marble are too much for one person. We want to share with another promenades on bridges, around us the shimmer of sun drops on water evocative of Monet, and only in a shared experience of the Notre Dame can we truly commiserate with literature’s most famous hunchback. We are in love with love. This yearning to be the star of my own romance has sent me over the years on a quest for he who could be cast as my leading man. Lust has frequently aced love. Regardless, I am never disappointed for long. Paris instilled in me this resilience:

Despite my numerous instances of two lives shared, my kisses with each man were more a hunger of the groin rather than an expression of the heart. Even so, the world became a smaller place. If men whose lives were never meant to converge could find a common bond in me, then love was possible with anybody, anywhere.

I am not giving away any surprise ending in “An American in Paris” when I say that the parting between Jerry and Lisa is merely a momentary debacle. That’s Hollywood. In my reveries, Paris was supposed to bestow upon me the luck it does our painterly charmer, and the swain who would indulge me with his companionship would also have Jerry’s good looks. (Remember, this is Gene Kelly, leading man in capital letters.) But every love story has a Milo – an odd person out, the lover as loser – and so it is in life. Every time I see Leslie Caron en pointe in the arms of Kelly, her skirt fluttering in the air like the wings of a dove, I think how right it is that the score is by the Gershwin brothers, Ira and George, my favorite of all American songbook musicians:

It’s very clear, our love is here to stay, not for a year, but forever and a day. The radio and the telephone and the movies that we know may just be passing fancies and in time may go.

Poor Milo. A chauffeur-driven convertible, haute couture, and blonde hair salon polished offer no solace in the face of rejection. She may bribe critics to hail Jerry as the next Cézanne, but no amount of dollars (or francs) could dragoon him to sing those words to her. Jerry Mulligan does give Milo one part of himself he had thought would be his lot to bear – a broken heart.