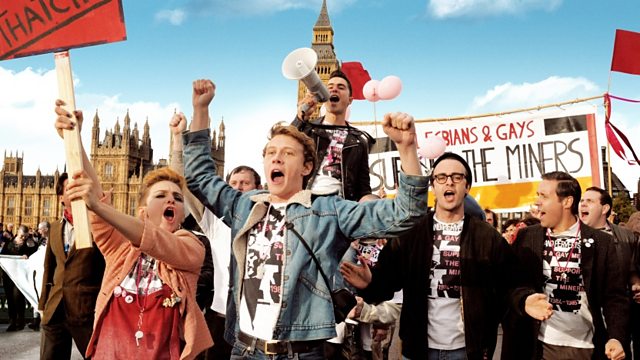 “Pride” (2014) is a celebration of camaraderie, acceptance, and identity. It recounts the true events in 1984 of the alliance between families affected by a miner’s strike in the Welsh town of Onllwyn and London gay/lesbian activists. The friendship between the two polar groups begins when headlines about the situation in Onllwyn cause Mark (Ben Schnetzer) to mobilize monetary support. He reasons that those who are oppressed… whether on account of their sexuality or dire wages… must stand in solidarity against their oppressors. The town is initially reluctant to accept help from people whose nature it condemns. Mark and his pals confront defamatory epithets and handshake refusals. A fellow activist, Jonathan (Dominic West), has an idea: show these stuffy townies a good time. At a meeting hall, he turns up the disco music and shakes his booty on tabletops. It works. The women let loose and wiggle away, and the men request dancing lessons. Gays and miners find a commonality in a zest for enjoyment. This is the underlying message of “Pride” – enjoy life. As Mark says, “There isn’t enough time,” an adage that homosexuals in the Western Hemisphere during this era took with gravity because of an epidemic that was decimating their community. He dispenses his advice to a closeted college student by the name of Joe (George MacKay), who has been lying to his parents about attending school when in truth he has been partaking in the fundraising efforts. It’s touching to see Joe, lanky with floppy blond hair and eyes sometimes frazzled, sometimes beaming, like a kid who clings onto a big brother he regards as the gatekeeper to the world. Indeed, there’s much to look up to in Mark. The guy is handsome, smart, and impassioned. He wears his gay identity as a laurel wreath, and whatever cause he advocates, he does so with the fire of a meteor. Although the ‘80s may have wreaked havoc on the lives of many gay men, a romanticism lingers over it. It was the first time since Stonewall that they marched the streets with fists in the air in a fight for their right to live.

My own identity as a gay man was budding during this decade. To this day, I envy my peers their accounts of a first sexual experience that involved a friend. A pubescent boy who puts out for his best buddy as a wager for losing a game of Trivial Pursuit, while George Michael croons “Careless Whisper” on the turntable, makes for a beautiful memory. It also enables one to believe in romance. My first time occurred at a porn arcade. En route from Manila to Boston, where I was to start college, my parents and I stopped over in San Francisco. I told them one afternoon that I wanted to explore the city. Given its blocks of gay bars and notoriety as a hustler gathering spot, Polk Street was my destination. His name was Will. He was 30-something with a shaved head, and he was dressed in red shorts and a white tank top that showed off the kind of body I had been fantasizing about ever since Nicholas Clay in “Excalibur” (1981) and “Lady Chatterley’s Lover” (1981) heated up my betamax machine. Will brushed his crotch against my backside in a bookstore as I thumbed through X-rated man pics. I stammered for him to “ta… ta… take me… some… where.”

I would not call excitement the feeling that overwhelmed me in the cubicle. It was a sensation of blood rushing to my head with such speed and my heart pounding with such a tremor that it seemed I was to self-combust. Light from a video screen cast a sheen on Will’s muscles. I had wanted this for a while, but I had not expected this to happen as it did. Perhaps it was too soon. Then again, there might never be a right moment. From then on, throughout college, sexual expression involved huddling in the corner of a newspaper stand to skim gay magazines and trips to porn arcades, my soul hungry for acknowledgement from other gay guys whom I encountered anywhere from the classroom to the subway. The most burning desire was the most elusive: love and friendship.

Joe in “Pride” has it good. He’s got a mentor in Mark, a family in gay and lesbian activists, and amity in Onllwyn’s people. His loneliness is with his parents. But that passes because they find out about him when his mother chances upon newspaper clippings he has been collecting on Onllywyn, Mark, and the gang. Sure, his mother is in tears and his father is in a rage. Nevertheless, the truth is out. If silence equals death, then noise equals life. Joe, in the end, is able to hold a loudspeaker to his mouth as he proclaims in open space equal rights to gays and miners alike. 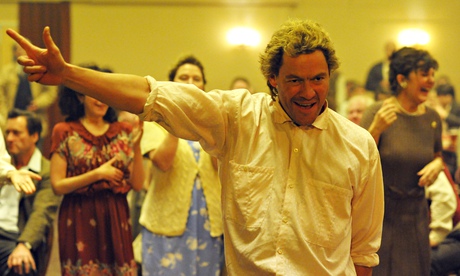 At Tufts University, I sought acceptance from resources different from Joe’s. I called the gay and lesbian hotline one evening. The mere act of pressing the numbers on the phone gave me heart palpitations. Since it was late, the phone kept ringing. I then found out about the Boston Alliance of Gay and Lesbian Youths (BAGLY) from the yellow pages. Sitting in a circle as we each broadcasted our clandestine crushes, masturbatory longings, insecurities, and traumas was nerve-wracking for a kid from the Philippines, especially one who had a hard time as it was greeting hello to a stranger. Fortunately, I did have role-models in John and Danny, two campus activists. The former was Caucasian, auburn-haired with glasses, handsome in a tall, bookish way and as vocal as a presidential candidate. The latter was Asian and lean and more on the subdued side. They were visible in the quad and on the library roof, championing their gay identities and the respect for all LGBT individuals. Pink triangle buttons were pinned on their tops as they were on other members of the Tufts gay and lesbian organization, marking them as comrades of an exclusive tribe.

It was staggering, their courage at so young an age. I wondered where they got it from. We didn’t have today’s copiousness of celebrities coming out of the closet, and the only gay character I knew of was Steven in “Dynasty,” who was far from an ideal role-model considering his mother was Alexis Carrington, prime time’s queen of conniving bitches. Although I didn’t stand beside John and Danny, the two were my saviors. They spoke for me.

Coming out in the second millennium is a different matter. The internet has driven porn arcades and gay magazines to near extinction. Chat sites furnish opportunities aplenty for the young, the confused, and the curious to connect with each other without the heebie-jeebies of public recognition. Online conversations establish familiarity. Coming out is less of a scary ordeal. At the same time, though, I lament the loss of innocence that underscored the fear of my generation. Sex was a mystery, not a boom of graphic videos downloaded onto a computer, and the knot in my throat as I cruised Polk Street was a rite of passage. Paralyzing as the experience was, it allowed for the possibility of human warmth.

Generations ultimately don’t matter. Each one gives birth to a flock of gays and lesbians who struggle to spread their wings. As “Pride” declares, to enjoy the marvels of love and friendship, we must stand up for our convictions, assert our identity. Only then will our voices echo in the deepest valleys, across the oceans, and into the heart of the most redneck of miners.