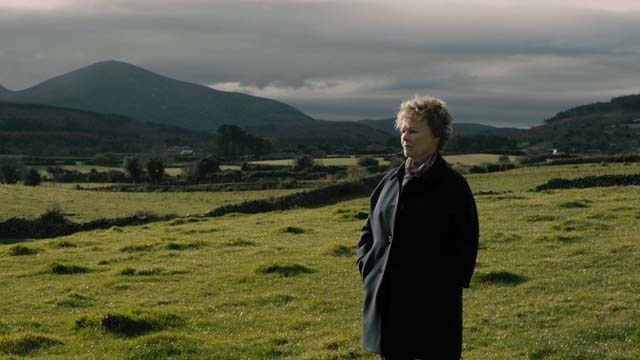 A mother has a way of finding her lost child. The nuns in “Philomena” (2013) live by the conviction of premarital sex as sinful so that girls who engage in it are damned and unfit for parenthood. Birth must occur without a doctor. The pain endured in the process is the girl’s penance, after which the child is given up for adoption, whether or not the mother consents. This is how a young Philomena (Sophie Kennedy Clark) is separated from her son. Her father sent her to a convent laundry in Ireland, a rehabilitation center in the 1950s for so-called wayward girls; she had gotten pregnant by a boy who had seduced her at a fair. In the four years that Philomena is there, working as payment for her bed and food, she has visitation rights to her boy. Then one day, he is gone. For the next 50 years, she would periodically return to the convent for information on his whereabouts, only to be told none exists. An older Philomena (Judi Dench) ultimately finds an ally in Martin Sixsmith (Steven Coogan), a reporter who is covering the story of her quest.

Through her journey, Philomena wrangles between hope and defeat, faith and disillusionment, anger and forgiveness. An atheist, Martin serves as her moral adversary, questioning her unwavering belief in God despite the nuns’ mistreatment of her. For all her devoutness, Philomena is not myopic. In a scene where she peruses a scrapbook that contains pictures of Michael and his partner, Martin is edgy; he doesn’t think she is able to grasp that Michael was gay. She does, instantly and without dismay. She says she had known when her son was a little boy, and having worked as a nurse, she reveals herself to be informed of the Republican government’s negligence of the AIDS crisis in America during the early days of the epidemic.

Mothers are surprising in that way. They are aware of much more than we kids give them credit for. My own mother is no exception. Like Philomena, my mother can be stoic about what she keeps to herself. I discovered this of her when I was 15, on the morning that she lay awake in bed as I entered my parents’ room to kiss them both a good day before I left for school. My father was asleep and snoring, so she was alone in her thoughts. The movie “Making Love” (1982), which I had rented the day before, was in the betamax machine, and the title bothered her; it was too adult. “What’s the movie about?” she asked. “It’s about a married man who has an affair with another man,” I said. My mother jolted as if to jump out of bed. “It’s a good movie,” I said. I may as well have come out. It would not have been a shock. As a child, my favorite color was pink; I played with my sister’s Barbie; I would reenact the story of Snow White (http://www.rafsy.com/films-1920s-1950s/snow-white-and-the-seven-dwarfs-someday-my-prince-will-come/); and I parodied mannequin poses. Instead, my mother lay pensive. I was at the age where if she were to pry into my thoughts and feelings, it would have been intrusive, even frightening. I had secrets from her now. So we parted in silence.

Months later, I joined a religious retreat that entailed a weekend of prayers, barbecue, and friends. Since it was my first spiritual experience as a burgeoning adult, my parents considered it a milestone. A letter from my mother awaited me upon my return home. It was the first love letter I ever got, and will forever be the only one of its kind. In it she writes on behalf of herself and my father about their dedication to my brother, sister, and me: 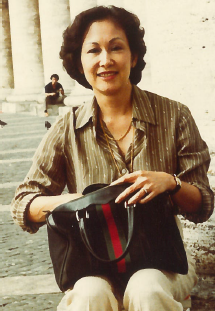 When time comes, you’ll find out that the most or one of the most difficult things to do is the profession of one’s love – in my case, much doubly so since most of the time, I can’t seem to express my true feelings in words. Most of the time, I presume on a lot of things, just as I presume that through our actions (Daddy and I), you’ve felt how we care and desire for you and Kuya and Ate the best in life… Sometimes, you tend to disagree and I do the same, but that is just normal, as long as you keep your respect for us just as we will not falter in our outpouring of love. Please keep in mind, too, that we would help you in all your problems, big or small. Never feel ashamed to confide in us, for as later in life, you’ll find out that the family is your only truest friend… Do pray that our family would continue to be this close and happy, full of love and respect for one another. Pray that God gives you all the luck and happiness and the success you crave, which are all the things I pray for every night. Seek, too, for God’s guidance so that with your prayers and mine, what we ask for would be easily granted.

I came out to my parents eight years later. I was living in San Francisco by then. As I said, they have always known. Coming out was both a relief and a burden. Whenever my mother would visit from Manila, she would worry each night I stepped out the door, asking what time I’d be home and to where I was going, understandably so. In those days, especially in the Philippines, the media coverage on homosexuals in America was largely focused on promiscuity and diseases. Mostly, though, my mother just didn’t want to be alone. I had been the child who would cry for Mommy to stay home, whose designated chair at the dining table was beside Mommy, who wanted Mommy by his side for now and always. A mother must often wonder at the man her baby son would someday grow to be. In the 50 years that Philomena never saw Michael, she thought of him every day, ached for him on his every birthday, always with an image in her head based on a single photograph taken when he was a toddler of how he must have evolved into the person he was meant to be.

One thing’s for sure: whatever ideas of a life a mother must entertain for her son, no way does she envision a hardcore club partier. Once, I came home at seven in the morning after an entire night of fun. My mother was seated on the hallway floor, crying. I had told her I’d be back at midnight. Since I was a no show, she went through my phone book and contacted my friends to inquire of my whereabouts, phoned my father in Manila for consolation, and sought advice from her own friend on filing a missing person report. I had not thought it obligatory to call her about my intention to be home later than stated. I was 27 years old. I did take her out to lunch to amend for my misstep. It was Mother’s Day.

That is what gives my mother happiness – being a mom. Worrying comes with the territory. With every visit, she stacks up on my necessities. In all the years I’ve been in San Francisco, I’ve had to buy toilet paper no more than half a dozen times. I only eat brown rice. So on her latest visit last summer, she demanded a trip to Trader Joe’s, where she – 4’11” and 78 years old – stood in line to purchase me a packet of healthy grains. And for each meal, she always asks, “What kind of food do you want? What can I cook for you? Do you want to eat out?”

Despite the physical rift between Philomena and Michael, the bond between them remains intact, growing stronger as the passing years enhance the need of one to find the other. Philomena is not alone in her journey. All his adult life, Michael had been searching for her, traveling near and far, his own determination unwavering.

As for me, I have called many cities home: Hong Kong, Tokyo, Manila, Walnut Creek, Boston, Paris, Ithaca. Today it is San Francisco. Tomorrow, who knows? Whatever my path, it will, in the end, lead me to one destination – the final resting place of the woman who nurtured me to life.