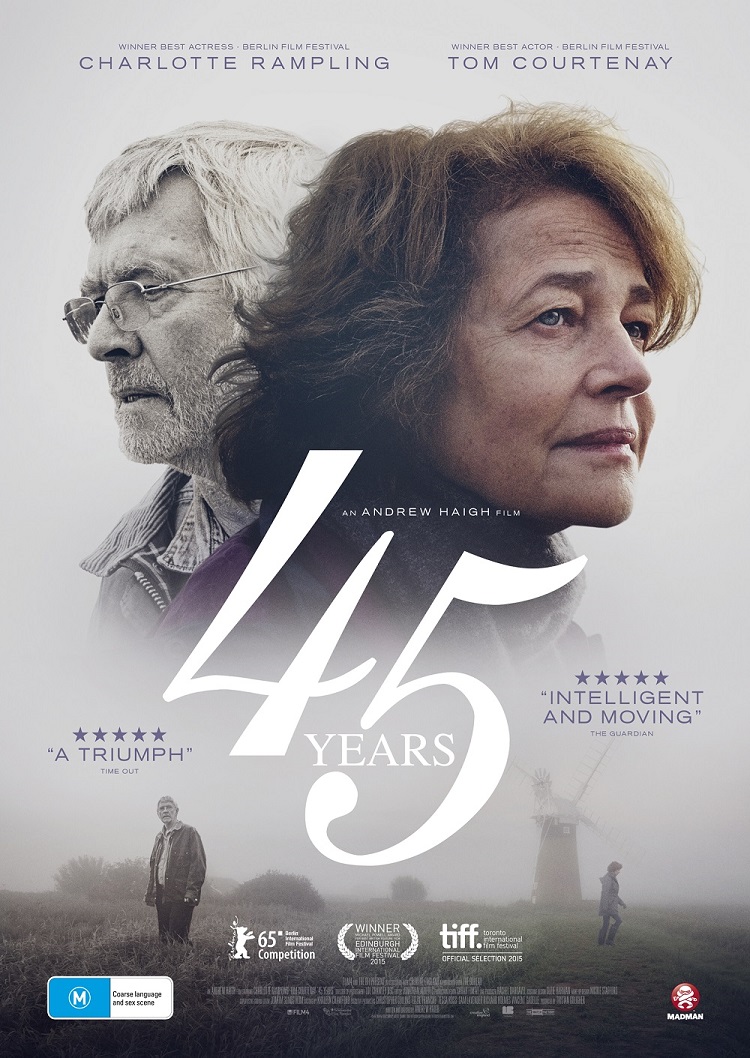 How well do we know the person who shares our bed? This is the question that insinuates itself like arsenic in water between Geoff (Tom Courtenay) and Kate (Charlotte Rampling) Mercer on the days that lead up to their 45th wedding anniversary. At the outset, they are a typical couple. They laugh at one another’s jokes, enjoy the same taste in music (“Smoke Gets in Your Eyes” is their theme song), and are sentimental over shared remembrances. She bandages a cut on his thumb. He tells her she’s beautiful. Childless, their home a cottage amid sky, trees, and grass redolent of a David Hockney landscape, they are severed from the world, their reason for waking upon sunrise each other. A letter Geoff receives one morning over coffee ruptures the serenity. The body of his first love, Katya, who was killed in an accident 50 years ago while both were on a snow trekking expedition, has been found preserved in a glacier. Now the memory of a dead woman frozen in youth invades every moment between the Mercers.

The added complication to “45 Years” (2015) is that the revelation that surfaces of Geoff’s commitment to Katya confounds the man himself. Like a volcano presumed dormant, latent feelings erupt unexpectedly, burying in ash everything that surrounds him. Kate fights to breath, while Geoff labors to stop the blackening of the air with pledges of emotional fidelity to Kate. How well do we know ourselves? 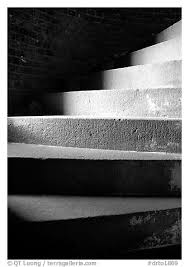 “45 Years” heeds to the preaching of gurus as a blueprint for an answer – that love is our best bet to realizing the yet undiscovered within us. We’ve all had someone who has generated a ripple beneath our hearts, someone we had been able to keep at bay until one day we found ourselves thinking about the person with a hollow feeling. Here’s a guy I’m surprised my insides didn’t palpitate over at the start. Meet Derek: early thirties; 5’11”; brown wavy hair cut preppy short; hazel eyes; a rugby player’s meaty and muscular physique. The year was 2004. We made eye contact at a club, the Mack Folsom Prison, the kind of place far from conducive for conversation. Slings were set up in caged areas, and monitors installed in ceiling corners played man videos. (You get the idea.) The joint was emptying out after a long night. I was standing by a sling, ready to leave, when Derek walked in and sat on a chair nearby, across a row of lockers that lined a wall. And then he approached me. “Come over to my place,” he said. The guy had a voice to match his look. How could I have gotten so lucky? I thought. The pick up was as simple as that.

Derek lived a few blocks away. His building was an industrial salmagundi of sliding doors to balconies enclosed in square spaces and rectangular opaque windows. His walls were white and bare. The floor was beige wood. Sun filtered through a tank of gold fish in the living room, while on a loft, on a leather-covered bed, Derek and I were gratifying our most animalistic of urges. Amid our intertwined limbs, he revealed bits and pieces of the person beneath the image. He worked as a flight nurse, a paramedic assigned to commercial airlines in the event of a medical issue among the passengers. (I had never been aware of such a profession.) He had earned a business degree from De Paul University in Chicago. And… here’s the real clincher… he moonlighted as a $300 an hour escort. What a compliment that he was offering himself to me free of charge. “What are you doing later?” I asked as noon struck. “You,” he said.

That morning was the start of a connection between Derek and me that would persist for over a year. “I always, always have fun with you, Rafaelito,” he once told me. On another occasion, as I walked into his place, he gazed down at me from the loft, his eyes a shifting shade of blue and green, piercing with want and tenderness. One thing he withheld from giving me was a kiss. A kiss for him was cognate to a commitment. Still, what I saw in his eyes was unmistakable. I might have felt something, too. I’m sure I did. I would send Derek sexy e-mails. To the first one, he called me while I was at work. “I jacked off to your e-mail four times,” he said. “How did you learn to write like this? It’s like a combination of poetry and sleaze.” Herein began my knack for erotica. Derek suggested I get published, and I did. Four of my erotic pieces so far have been anthologized. The latest is based on him:

Have you forgotten that scorching May afternoon in the park in front of my building? Kids played in the sand dune, folks sunbathed on the grass, and we sat on a bench. We were stoned, sweaty, shirtless and reeked of each other’s sex. A couple nearby commented to each other that the heat was indicative of an impending earthquake, so I said to you, “If an earthquake struck and trapped me beneath a mountain of rubble, everything would be okay so long as you were with me.” You hooked your arm around my neck, laid my head on your heart. “Me, too,” you said.

Now this interaction never transpired between Derek and me. While some instances I do relate are factual, an element of wish fulfillment pervades the story. Through art, we writers seek answers and resolutions to the jumble that is life. Only on the afternoon that Derek spurned me did I long for him. He had found somebody else, somebody he called a boyfriend, and in front of this guy while at Derek’s place one weekend I brought up a topic intimate to Derek and me. Being cut off was a sort of death. Perhaps I hadn’t been in tune to what lurked inside of me because until then, Derek was available and easy. So it must have been for Geoff in “45 Years,” this blindness to a deep-rooted affection. For the old man to confront the facts, Katya’s corpse needed to be unearthed intact in a time capsule.

As for Derek, he is somewhere out there alive and well, though enshrined in my memory as a young Goliath. My own fantasy of him remains as such:

You know what I really want is for you to wrap your hand around my neck with loving hands and to kiss me, kiss me long and hard. That is all I have ever wanted. I know a kiss is what you want from me, too. Never mind that I’m from across the Pacific, a newbie to your country, a newly minted citizen of this land of the free and land of the brave. What we have between us surpasses all cultural divides. Do I dare call it the “L” word?

I can merely guess at what Derek would have truly wanted from me, be it a kiss or anything else. Warm looks and hours of physical unity aside, we never spoke of what might have drawn us together on a subliminal level. He always had “fun” with me, so he said. Am I to take that word at face value? In the end, we were two strangers in one bed. 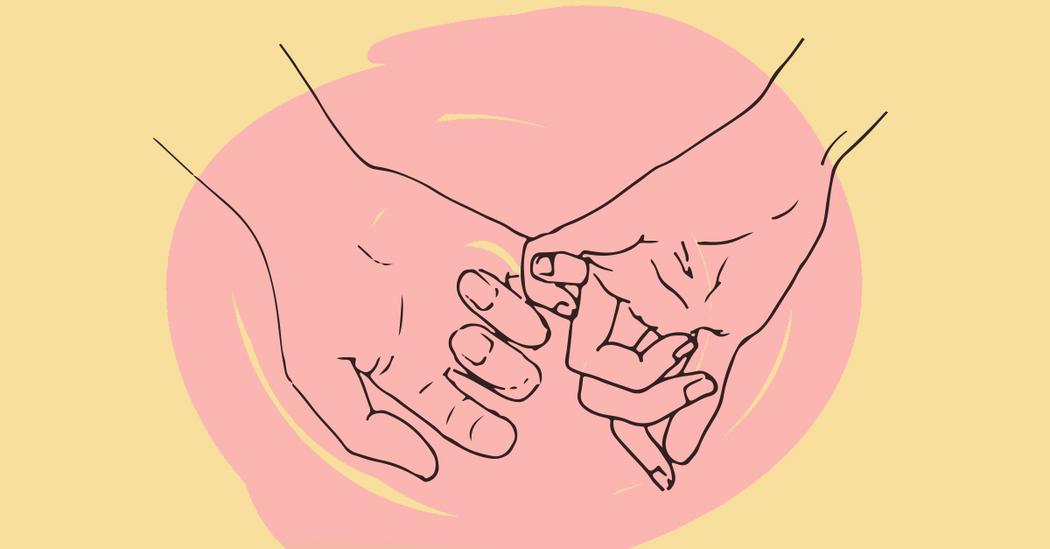