“Tootsie” (1982) is my favorite comedy ever. I didn’t even like it on my initial viewing, not that the plot and characters are problematic. I happened to watch the movie at the wrong time, late night at the end of exam week my sophomore year in high school; I could hardly stay awake. Worse yet, the betamax cassette was a horrendous copy. Scenes were blurred, and static lines crossed the screen. When a friend said he thought “Tootsie” to be funny, I offered no comment. He cited a scene in which Michael Dorsey (Dustin Hoffman) in drag as his alter-ego tries to hail a taxi, only for one to bypass him in favor of a pretty flagger, and another scene, one set in Central Park, where he pushes a mime in venting his frustration over Julie (Jessica Lange), who regards Dorothy Michaels (a.k.a Tootsie) as her best friend without knowledge of the man who exists underneath the hair curlers and garters. I am usually keen to either agree or disagree. With “Tootsie,” I felt I had missed out on something. The film must have merit for my friend to have liked it so and for it to have been bait for the Oscars (ten nominations, including a Best Supporting Actress win for Lange).

I would discover the rom-com for all it’s worth some 15 years later, when it screened on a bus ride from Ithaca to Manhattan, and again a few years after that at the Castro Theater in San Francisco. “Tootsie” is a riot. It is also storytelling at its most clever. An unemployed male actor shams as a woman at auditions to get a female role on a TV soap. By living a double existence, he experiences the misconducts to which men subject the opposite sex. Sexism is heavy material, one that incites febrile emotions, but under the adroitness of the writers and director Sydney Pollack, “Tootsie” eschews heavy-handedness in favor of humor and humanity. Of all the novels that have guided me in my craft as a writer, the medium of film can stand among them as a supreme example of how to make people think through the heart and feel through the brain. “Tootsie” is one such film.

Truman Capote has advised that in order to relay the impact of an emotion, a writer must be levelheaded and clinical in one’s approach to a story. An emotion needs to be dissected, much like a frog in high school biology, for the perfect words to be applied; to write in the heat of the moment produces a mishmash of a piece. I told a friend this after he had penned an e-mail letter to San Francisco AIDS Foundation wherein he expressed his indignation at a response received a year late to a job application. “I got my anger across,” Doug said in defense. “Yes,” I said, “but it wasn’t logical.” Human Resources had brought the e-mail to my attention since Doug had cc’ed me. It manifested an irascible disposition, jumping from one subject to another in a single paragraph, from calumny of the foundation to a declaration of voting Republican. HR called Doug “crazy.”

Although I understood Doug’s stance, I would have expected him to have heeded to the tip he had given me when I had a disagreement with the doorman to my building. A guest who had parked in the driveway didn’t align his car with the pavement, at which the doorman phoned me and reprimanded, “What kind of parking is that?” I was inclined to tell him off in the lobby. “You’re not in the best frame of mind, Rafaelito,” Doug said. “Cool off and write management a letter a few days from now.” I did. I stated in my letter that the doorman could have been courteous in addressing the issue, that everybody in the building, from the tenants to the maintenance men, must be treated with respect, and if he couldn’t do this, then perhaps he ought to find employment elsewhere. The doorman apologized, and he has been polite to me in the 17 years since.

For passion to translate into eloquence, we have a teacher in Martin Luther King, Jr.:

I have a dream that my four little children will one day live in a nation where they will not be judged by the color of their skin but by the content of their character… I have a dream that one day every valley shall be exalted, and every hill and mountain shall be made low, the rough places will be made plain, and the crooked places will be made straight, “and the glory of the Lord shall be revealed and all flesh shall see it together.” This is our hope, and this is the faith that I go back to the South with. With this faith, we will be able to hew out of the mountain of despair a stone of hope. With this faith, we will be able to transform the jangling discords of our nation into a beautiful symphony of brotherhood.

Tame words, I think not. A diatribe, I think not either. The injustice of racism, the pain and fury that erupt as a consequence, and the shout for equality, grip the listener through poetry. The greatest stories ever told do the same. Many even employ humor, which itself can be both material for poetry and emotional artillery, as William Shakespeare demonstrates in “Much Ado About Nothing” and “A Midsummer Night’s Dream;” hence, the Shakespearean elements in “Tootsie.” Dorothy and Julie are alone in the latter’s living room. Over a bottle of wine, Julie expresses her yearning to be loved as Dorothy moves closer to her, closer, until they nearly kiss, upon which Julie jumps from her seat and Dorothy chases her, anxious to expose the man behind the woman. (“If you can only see me out of this dress.”) The phone rings. Discombobulated, Julie picks up an acorn. Then when she does answer the phone, it’s dad (Charles Durning) on the other end, who himself is in an awkward spot because he has fallen for Dorothy. Gender role-playing results in more complications than Michael/Dorothy anticipated. With such a convoluted tangle of relationships, somebody is bound to get hurt. Let laughter engage the audience with the conflict. Laughter elicits sympathy. We’ve all had comedic moments, even in the most severe situations. 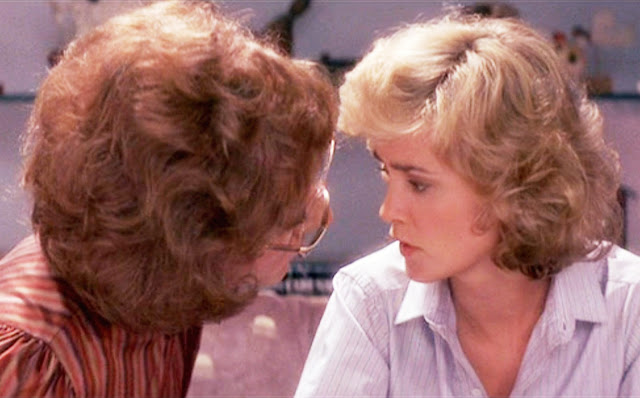 Humor was a primary factor in the development department at San Francisco AIDS Foundation, a necessary diversion in a work environment that operates in the shadow of illness and death. The director of development had been a frat brother in college whose Boston accent would surface on occasion (i.e., kah for car), while my supervisor, a hardcore Britney Spears fan, had been a drama major. A fellow donor services specialist was an aspiring movie director, and on Saturday nights, a few other colleagues were my party cohorts. A mélange of artistic personalities and free spirits, we let loose with bathroom jokes and celebrity gossip to temper the intensity of HIV/AIDS. We were more than employees. We were friends. Such is how the foundation regards its clients so that in annual reports, smiling faces and the personal accounts attached to them humanize statistics.

We hear it often in the news, societal ills from homophobia to xenophobia that cripple a community. Politicians debate. Activists rally. Tempers flare. Amid the clamor, a voice demands our attention – a whisper of words as lyrical as notes to a Schubert sonata, a spurt of laughter as an antidote to the chaos. What we are listening to is the story of a life, the tragedy and the comedy of every day, and in its softness, it articulates the state of the world with more force than the loudest of vociferations.