We Filipinos thrive on melodrama. Nearly 400 years of Spanish colonization have given us telenovelas, songs with voices that warble in anguish, and crimes of passion. Brawls erupt upon one man’s glance at another man’s woman. Cuckolded husbands kill wives. Fathers kill daughters and their seducers when caught in a carnal act. We justify manslaughter in the name of love, and we bewail this most maddening of human emotions to God, Jesus, and Mary. Only in 2010 was a bill passed repealing a law that enforced light penalties to such murders. Regardless, this doesn’t change the way we are. We relish in the crucifixion of the heart; love isn’t real unless it stabs.

No yearning is more excruciating than the unrequited. Spanish director, Pedro Almodovar, knows this all too well. He could not have made “The Law of Desire” (1987) otherwise, and he certainly was keenly aware that every one of us on this planet has experienced a form of unreciprocated affection, whether it is with the girl next door or Elvis Presley. “The Law of Desire” is about a triangle that involves a celebrated movie director, Pablo (Eusebio Poncela); a partner of convenience, Juan (Miguel Molina); and a fan, Antonio (Antonio Banderas). They cruise, fuck, pour out their ardor in letters, and speak such lines as “it’s not your fault if you don’t love me, and it’s not my fault if I love you… if I forgot you like you said, I’d end up empty inside…” The ultimate Jacques Brel hymn to love, “Ne Me Quitte Pas,” punctuates each moment of a caress:

Don’t leave me. I offer you pearls of rain from countries where it never rains. I will cross the world until after my death to cover your body with gold and bright light.

As though this weren’t enough passion, Antonio in the arms of Pablo sings in the climactic scene a ballad that speaks for all the open wounds in the audience:

I doubt that you will ever love me like I love you. I doubt you will find as pure a love as the one you’ll find in me. You will have a thousand adventures without love, but at the end of it all, there’s only pain.

These men are sexy, fervent, and poetic. Love is in the air, in their walk, in every word, and in every look. So why is all their devotion unrequited?

Simple. If these inamoratos were happy, no Almodovar film would exist. Leave it to the Americans to make a stale love story. What we have instead are the primary ingredients to a distinctly Spanish (and Filipino) romance – lunacy and obsession. Antonio is no ordinary film aficionado. He is a stalker, one who orchestrates each meeting with Pablo at a film premiere, an amusement park, and a nightclub, and one so damn good looking that the victim can’t resist inviting the guy to his place for a roll in the sack. A single night leads to others, until Antonio becomes so insanely enamored that he goes to execrable extremes to infiltrate the director’s life.

In a tale of operatic grandeur, a dramatic ending is de rigueur. True to his reputation, Almodovar gives us a tragic finale to end all tragic finales. Law officers gather on the street. Silence oppresses the night. Police lights flash blue. Everyone looks up at the balcony to Pablo’s apartment, waiting. At last, it comes – a gun shot. At the foot of a makeshift altar to the Virgin Mary, we have the corpse of a self-sacrifice.

What a fitting way to end heartbreak. No woman in the history of the world has suffered nearly as much as the sacred Virgin. Our prayers to her for strength and guidance have endowed us with the perverse hunger for this most violent of tribulations. Otherwise, we wouldn’t need her. So we wallow in misery. And although suicide is a sin, done for love, it is the stuff of art. It is beauty.

But what an ugly feeling unrequited love is. I had a couple of instances of it in college. Because the guys I longed for were straight, their unresponsiveness was acceptable. Then I moved to San Francisco, where at a nightclub, I met a smooth talker of a man who possessed a physique made for military action – sinewy and muscular with a crew cut to complete the image. We spent the night together, woke the next morning in each other’s arms, and exchanged numbers. He said he’d call in a couple of days. He never did. I pined after him like a dog whining for its master, imagining chance encounters at Costco, in Union Square, in Palo Alto. Aside from the visual impact, the man had degrees from U. Penn and Stanford, and throughout the night, he would look into my eyes, blink, and whisper, “I want to make love to you.” How could I not fall for him? When he finally did call, I was home to pick up (no cell phones then; this was 1993). After I greeted hello, he stalled and said, “I meant to call somebody else. I pressed the wrong number. Sorry.”

Yup, the guy was Latino. The one time I had the courage to call him, I asked, “Have you ever watched ‘The Law of Desire’?” His answer: “Oh, that’s one of my favorite films.” I have no recollection of whatever else we might have talked about. The conversation was strained. Those who have experienced reciprocated love say both parties have words flowing out of them at the first meeting. I knew it wasn’t meant to be. But since I didn’t know him, I saw him as flawless, and onto him I projected desires of intimacy and fidelity.

God, why this pain? How long will it last?

A friend consoled me that, in time, the pang would wear off and I would forget. Yes and no. I’m over the guy. I haven’t seen him in 20 years. I hardly think about him. If I were to see him again, I don’t know if I’d want him. And yet, I remember everything that transpired that night upon our first handshake and the months of emotional debilitation that ensued. That, I will never forget nor do I want to.

Neither can I forget “The Law of Desire.” The film is an ode to passion. When the mind summons an event from the past, the emotions surrounding that instance wash anew over us. They may not linger as before, but they remain smoldering in the core of our being until the day we die. It’s called being alive. That is why our hearts need to ache every now and then, for only in heartache can we take flight in the rapture of true love when it finally happens. 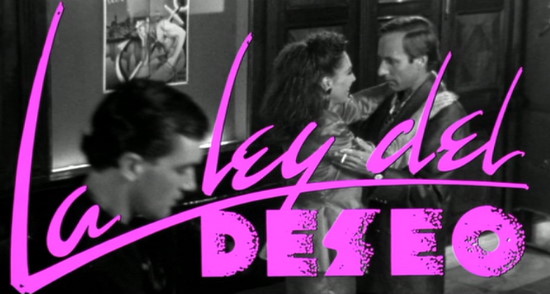