Sean Connery, Roger Moore, Timothy Dalton, Pierce Brosnan, Daniel Craig… we all have our favorite James Bond. Biases can lean towards the Welshman who set the bar for grace under pressure while strapped to a gurney with a laser gun aimed at his crotch. Or we might be sentimental over the Brit formerly known as the Saint who traipses a Caribbean jungle, evading witch doctors and voodoo hexes, because he is the 007 our fathers introduced us to. And there’s the millennium star whom doubters first dismissed as James Blonde. In four films of the spy franchise, could he really have raised the bar by several notches? Notable, all. However, this is not the complete list. The one Bond frequently overlooked exposes his vulnerable side in what is perhaps the most challenging of his assignments, “On Her Majesty’s Secret Service” (1969). Our world savior does more than survive a snow avalanche and escape by seconds a villain’s lair, perched atop the Alps, on the verge of exploding. He loses the only woman for whom he abnegates his bachelorhood. He’s George Lazenby, a lover more than a playboy.

George Lazenby deserved more than one shot as James Bond. Pop lore has it Lazenby did such a diabolical job that he was fired. A friend of mine who was a teen when the actor made his debut is of this opinion. “He looks like an idiot,” Quito said. I was a student in Paris, and “On Her Majesty’s Secret Service” was rerun on TV. The image Quito was referencing had Lazenby in a squat position, aiming a knife at a human target, mouth firm and brow curled. Lazenby was more Kung Fu grasshopper, less Sean Connery. I might have tuned in to the movie till the end. I don’t remember, for although I would catch the latest Bond flick as it either screened in the cinema or was taped on betamax, I did so not because I was a fan but because it was the in thing, and whenever a Bond from the past aired on TV, I watched out of curiosity, though with no recollection afterwards of whether or not I had sat through the entire run. The plots, if any exist at all, are interchangeable, and as for characterization… forget it. James Bond is all posture and mindless adventure.

Not until Daniel Craig did I anticipate two hours of martinis shaken, not stirred, he who has made the character of Bond his own by infusing him with emotion. In “Casino Royale” (2006), the dude cries. When has Bond ever shed tears? Actually… hold on… 37 years earlier, he ended his tenure on her majesty’s secret service with a sob, and this on account of the same loss as his fair-haired successor – the love of his life. Had it not been for Craig, I would never have discovered this. My fandom of Craig compelled me to research the ranking of Bond films from worst to best. “On Her Majesty’s Secret Service” consistently has a spot in the top five, and one list places it in the number one position. The reason: it contains the singular element that would make “Casino Royale” a smash among audiences of the second millennium – a doomed romance. 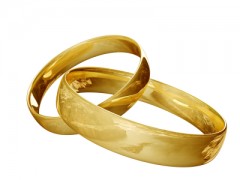 I decided to give George Lazenby another chance this past holiday season. Coupled with Diana Rigg as Countess Teresa “Tracy” di Vicenzo, the sole Bond girl in 63 years whom our hero takes to the altar, Lazenby adds a layer to the secret agent that is vacant in his predecessor. The best moments in “On Her Majesty’s Secret Service” are with her. A presence of pulchritude and depth, Tracy transcends ornamentation. The most stunning is the montage of she and Bond falling in love – a barefoot stroll on the beach, a horse ride, a promenade in a flower garden. It’s a Hallmark pastiche that is oh so heart melting because he is no ordinary man and she is no ordinary woman. And with Louis Armstrong providing the background music, we’ve got the brilliance of a diamond:

In a 1970 interview, Lazenby speaks of the pressures to fill Sean Connery’s tuxedo. Director Peter R. Hunt instructed him to imitate Connery’s every nuance so that Lazenby met opposition in attempts to assert his own interpretation of the Ian Fleming creation. (He felt the spy should be humane instead of a cold killing machine.) An object of condescension for his lack of experience as an actor, he refused a seven-film Bond contract, and with heavyweights of the franchise perpetuating a reputation of him as difficult, he found no work in Hollywood after the release of the film that had initially opened a door to million-dollar opportunities. How death-like that must be, to have the world snatched from us when just a year earlier it had been offered as our castle. Lazenby did such a fine job, too. All that romancing humanizes a character usually portrayed as a feelingless fornicator. 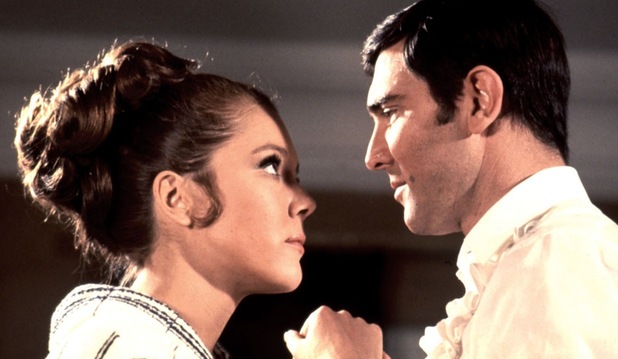 If there is one characteristic for which Hunt and the producers could not criticize Lazenby, it is the panache with which the newbie carries the clothes. So many films emphasize women’s fashion. The Bond films are truly a man’s directory on the art of a suit. I myself had a white dinner jacket back in high school. I never wore it, until a chance came when I was awarded the gold medal for an oratory competition and was sent to Jakarta to represent the International School Manila (ISM) in a competition that involved all the International Schools in Southeast Asia. The subject I spoke on was nothing that pertained to the current events of the day. Never a politico, I am more facund on matters about life that novels impart – the futility of revenge, love, dignity in the face of defeat, philosophies that the heroes who populate the pages of Alexander Dumas live by, Dumas being the author who most resonated with me at 18. What a manly accomplishment it was, how Bond debonair talking of me, to have beaten half a dozen or so contestants in my high school, many of who were vocal in my history class about everything from Communism to Ronald Reagan. Those who had doubted me because of my silence as a student at once deemed my speech and my delivery of it as “excellent.”

In front of my parents’ bathroom mirror, I practiced my winning speech in preparation for my big turn in Jakarta, white dinner jacket on me paired with beige trousers purchased during the previous summer in New York. Black pants would have been too formal. The competition was a day affair. Day called for a light color, and my attire was the closest thing in my wardrobe to a cream suit, the kind James Bond wears the morning after his first night with Tracy. I rehearsed every pause, every drop of the voice upon a particular vowel, memorized every word. And what words they were, straight out of an SAT manual: perspicacious, pertinacious, supercalifragilisticexpialidocious…

I deserve to be up there, I thought in Jakarta. The final five orators were on center stage in an auditorium with every seat filled. I had not made it past the elimination process. Days earlier, the contestants had delivered their speeches in a classroom to a pair of judges. One judge commented that I was bombastic. That was enough to do me in. As I sat in the auditorium while a girl at the podium clasped her hands to the ceiling in imploring the audience to feed the children of Ethiopia, all I thought was that if she had a shot at the crown, then my strike out was more a matter of bad luck than of bad performance. White dinner jacket, so long.

Three years later, at the American College in Paris, I redeemed myself. In an oratory class, a girl handed me a note in which she wrote that whenever I speak, people’s jaws drop, and at the end of the semester, I was awarded the grand prize at an oratory competition. Such good fortune can happen to anyone. When it strokes a famous face, how the angels sing. Take George Lazenby. He never became a movie star. Nevertheless, the only instance he ever got our attention is in the James Bond installment that has increased in eminence over the course of time, and this in no small part because of him. Odd how things work out. 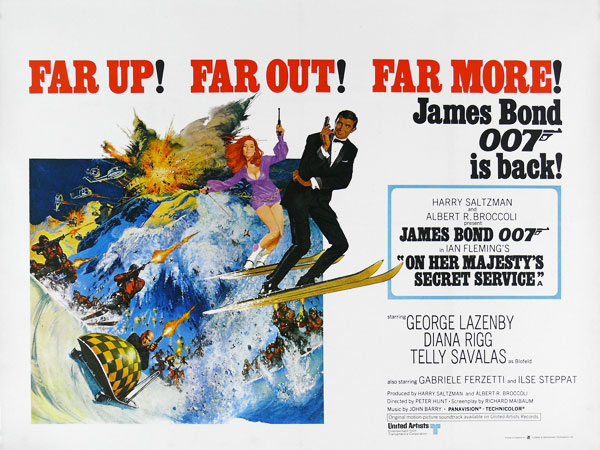