“Jesus Christ Superstar” (1973) does something unprecedented. It makes religion groovy and transforms the Son of God into a pop culture icon. Until the film’s release, hymns about the Lord had been associated with bible thumpers in shirts buttoned up to their necks, and the scriptures had been abstruse material for catechism classes. Suddenly, in the first collaborative hit between Andrew Lloyd Webber and Tim Rice, youngsters in bell-bottoms, fringes, and shirtless vests let down their hair, expose their belly buttons, and gyrate their hips to Godly lyrics accompanied by drums and electric guitars. Nothing biblical here. These acolytes are of the me generation. They dance with such abandon and sing to such a feverish pitch that rock-n-roll, in the Age of Aquarius, is elevated to the spiritual.

I was seven years old when “Jesus Christ Superstar” was screened in Manila on Holy Week of 1974. Going to the theater to watch it was a family event. At dinner that night, I could hardly digest my meal. The scene where Pontius Pilate (Barry Dennen) lynches Jesus (Ted Neeley) filled me with visions of blood. We might have gone to mass after the film because instead of food, I could smell the choking odor of church incense like sweat and tears coagulating down my throat. Whip lashes… vestment hem rustling against a red carpet… gashes on Jesus’s back… a chain-dangling bowl of smoke… these could have been scenes out of “The Omen” (1976) rather than from a rock opera and a prayer sermon. Religion is disturbing with its stories of betrayal and Satanism. The number 666 will forever connote evil. “Jesus Christ Superstar” is something else. The music got me through dinner without vomiting. Even though the film has lepers and death, all the bad on earth juxtaposed with the good, none of that outdoes Mary Magdalene (Yvonne Elliman) when she croons, mellifluous as a nightingale, “I Don’t Know How to Love Him” or Jesus as he belts out “Gethsemane” while genuflecting before the fire of the setting sun.

For my brother, Raymund, who was then only 14, the film was more than a pleasurable viewing experience. It changed his life. The soundtrack to “Jesus Christ Superstar” was the first long-playing album he purchased. It was a two-record set. The cover opened up as a scrapbook to present pictures of scenes from the movie. Of all the records my brother would collect over the years, he must have held on to this the longest because my memory of the cover consists of musk and a faded crucifix against an azure sky whitened around the edges from wear and tear. Some dreams are hard to let go off, and “Jesus Christ Superstar” is one of them. The rock opera marked the birth of my brother’s aspiration to be a singer.

My brother had what it takes to pass the audition for Kundirana, a music group of La Salle High School boys that is prestigious in the Philippines for engineering the careers of obscure musical talents to national renown, the most famous being Gary Valenciano. My brother made TV appearances and went on a cross country tour. Photo albums show him and other members aboard a bus, laughing and dozing off, girls with them even though this was an all-male minstrel. Groupies, I suppose. Why not? Wherever you’ve got a band of 16 to 17-year-old boys, girls are bound to latch on, especially when the boys have melody flowing out of their mouths. 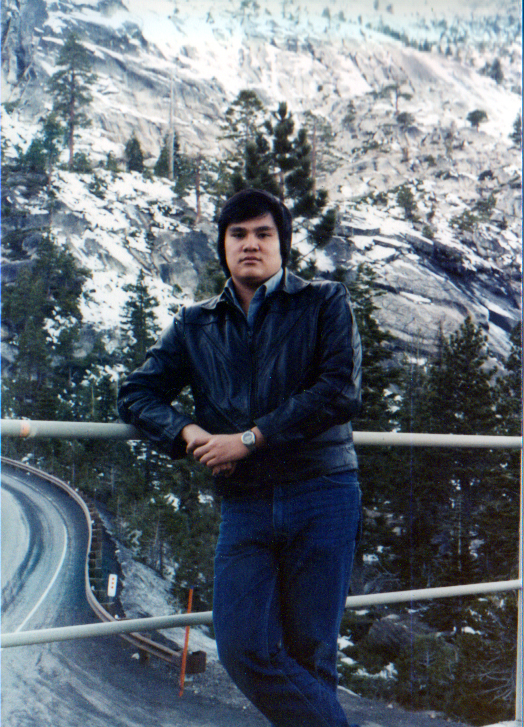 The rest of the family and I got to see my brother perform live. In white Elvis attire of flared pants and plunging neckline, he did a solo rendition of “Old Man River.” It was just him onstage and his baritone timbre. That was the first time I saw him as somebody other than the guy who would order me to change the TV channel or to fetch a canister of Pringles. There must have been instrumental accompaniments, as well, but I didn’t hear any of that. With the theater as his domain and he the sole person in the spotlight, I understood at last the seduction of performance. It’s in every scene of “Jesus Christ Superstar.” Our biblical heroes, as center dots to the massive circle of Jerusalem, possess heaven and earth through the might of music. For that moment, my brother owned the world.

Decisions being what they are, this stamp of indomitability was not meant to continue past high school. It was natural for my brother to want to pursue a singing career… Kundirana only selects a handful out of the dozens of auditionees… but life as a grown up is not a performance, and on this opinion my parents were steadfast. My brother went off to college to study business, a practical choice and one not entirely his. Such is Asian culture – the three primary avenues for a career as laid down by our elders are law, finance, and medicine. Given its nature of economic uncertainty, a profession in the arts is a rarity for a man, talent notwithstanding, which is why when I was earning my B.A. in English at Tufts, I was the only Asian guy in many of my classes. Although my brother did what he was told, the yearning to sing couldn’t be squelched. A great love never dies, only my brother had to contain his great love to parties, karaoke bars, and church.

My brother might have wondered at the path he had been made to take, while I was given free-rein to choose my own. Perhaps my parents didn’t see the life of a scribe as that enormous of a monetary risk. Look around us – papers and magazines everywhere. Words are our primary form of communication, and therefore a means of survival. Words are practical. Music is purely an expression of the soul.

That was a long time ago. We have aged and have since moved on. The scandal we caused our parents over bell-bottoms, platform shoes, and hair grown to such length as to cover our ears is passé. One thing remains: over 40 years later, “Jesus Christ Superstar” continues to sing and dance in the hearts of those who witnessed its phenomenon. My brother now has four sons, one of who is himself a guitar-strumming balladeer, and so it is in the next generation that the spirit of my brother’s dream lives on.