30 years later, that genius of a car still stupefies me. It’s the most awesome invention that ever was. Or should I proclaim instead that never was? Hard to say. The thing is a movie invention, and we all realize how significantly more ingenious imaginary machines are than anything real that comes out of a Chrysler assembly line. Now I am not an auto junkie, never have been. I am especially not prone to hyperboles, that “awe…” word in particular. In this case, however, the object of reference deserves the praise of awesome. I would not be exaggerating. Einstein would agree. (No exaggeration here either.) 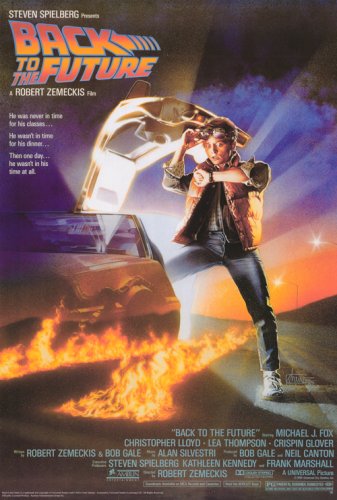 When “Back to the Future” (1985) unveiled Doc’s brainchild, it sped off the screen and into pop culture Neverland. The poster image of Michael J. Fox in character as Marty McFly raring for the adventure of his life, car track marks on fire as he counts, panic-stricken, his watch tick away the seconds, is synonymous with the 1980s. Every generation can claim a decade. For me and my peers, the decade of padded shoulders and Pac Man fever is the one and only. I was 18 in 1985, the age of Fox’s character and of his parents when he travels through time to meet their adolescent incarnations. The Thompson Twins topped my list of pop groups. I deified Kelly Lebrock. Benetton populated my closet. I also sang in the privacy of my room to Frankie Valli and the Four Seasons, swooned over Audrey Hepburn, and bathed my head in hair products to achieve (unsuccessfully) James Dean’s pompadour. In this, I thought I was an anomaly, until Doc’s car materialized in a void and landed on the streets of 1950s suburbia.

Of all the periods in the history of the world, we wonder why Doc (Christopher Lloyd) would program his invention to journey to a monotonous place in a sedate time. The 1940s had the adventure of war. The 1960s was a string of social upheavals. Go further back to previous centuries, and the selection is immense. Sure, the ten years sandwiched between the introduction of the Volkswagen Beetle and the presidential inauguration of John F. Kennedy boasted glorious movie stars – Grace Kelly, Marlon Brando, Elizabeth Taylor – if that’s what you’re into. Otherwise, it suffered from a surplus of Tupperware. And yet, a moment in America when families were migrating away from urban centers makes sense. Like the pioneers of the west, they were etching on new territory a golden future. Not everybody had it good, though, and two of the unlucky ones are Lorraine Baines (Lea Thompson) and George McFly (Crispin Glover), Marty’s mom and dad.

Our introduction to Lorraine and George is an ugly picture; they’re losers. Lorraine provides no incentive to start a day. Her face Elizabeth Taylor jowly during the actress’s John Warner phase, she’s a drunk who greets her family with a grimace at the breakfast table. George is the quintessential nerd. His despondent eyes through aviator glasses light up only when he guffaws, and he walks with a slouch as if in apology for treading the earth. Marty also has a mama’s boy of a brother, David (Marc McClure), and a sister, Linda (Mary Jo Sperber), who offers no relief. Picture Miss Piggy, but with glasses and a whininess in place of the glam wardrobe and the attitude. You wonder how a dude like Marty could have been born into this family. So does he. Doc Brown is the one person in his life whom Marty is proud of. White hair in disarray lends Doc the appearance of a walking streak of lightning. He regurgitates ideas with the rapidity of a machine gun so that we can’t help falling mute the way a child does with a fairy tale. Everything about this scientist is unreal to Marty, but then not quite. As outlandish as his visions are, Doc aspires to fulfill them. From dawn to dusk, he is confronted with a black board of hieroglyphic computations until… lo and behold… he surpasses the imaginings of H.G. Wells. This time machine is real and it works.

Though the journey Marty embarks on isn’t one he would have chosen, it turns out to be an enlightenment. He witnesses for himself where it all began for his parents and why it went wrong. Lorraine in her youth is beautiful. George is talented. Marty never regarded his parents this way, and seldom ever do we with our own parents. It’s an exhilarating discovery for him that his father should possess the gift of creative writing. The guy pens tales of aliens visiting our planet. Marty asks to read them. George is embarrassed. “Oh, no, no, no,” he says. “I never… uh… never let anybody read my stories.” Marty asks why not. “Well, what if they didn’t like them? What if they told me I was no good? I guess that would be pretty hard for somebody to understand.” Here lies the crux of the problem: dad is insecure.

Like arson in liquid, George’s insecurity so contaminates his blood that the local bully, Biff Tannen (Thomas F. Wilson), remains his nemesis into the future. As high school kids, Biff torments George into doing the former’s homework. As married men with kids, Biff torments George into paying for car damages Biff incurs. George acquiesces with a snort and a goofy smile. It is Marty’s mission to change his father into a strong man. More than having a parent to be proud of is at stake. This is a matter of life and death. You see, Marty’s appearance in the past thwarts the event of his parents’ meeting. Instead of George whom Lorraine nurses to health after her father drives into him on the street, it is Marty. No meeting between Lorraine and George equals no marriage. No marriage equals no birth of the McFly progenies.

Of course, Marty is too lovable of a character to be eliminated, and “Back to the Future” is too fun of a movie not to have a sequel (or two). We are also rooting for George. He speaks for all of us. We want him to have the break that he deserves as much as we want one for ourselves whenever life deals us a bad blow. No better moment for this fighter in embryo to shine… with Marty’s encouragement… than at the prom, the singular event that caps every teen’s existence. In the school parking lot, he catches Biff forcing himself on Lorraine. One punch on that asshole’s nose, and Lorraine sees in George a winner.

Back in the future, George is a best-selling sci-fi author; Lorraine is sober; David and Linda have their rest and recreation at a country club instead of at Burger King; and Biff kowtows to George. This is too drastic of a turn around, we might say. So what? At this point, the film is no longer about parents, but about us… about you.

Every decision you make today will have a repercussion on tomorrow. You can either be George McFly, the winner or George McFly, the loser. Certain decisions will be more difficult to make than others. Don’t fret. You’ll always have somebody to help you. The unlikely ally can even be your own son. And under any circumstance, never forget the life lessons of “Back to the Future”: