“Gone with the Wind” (1939) could not have ended any other way. Frankly, my dear, I don’t give a damn is a snappy last line as well as a contemporary one. (I had no idea people spoke with our colloquialism in the 1860s.) More than that, Rhett Butler (Clark Gable) has every reason to walk out on Scarlett O’Hara (Vivien Leigh), she a sloppy sight of tears as she begs him to stay. For almost three hours, Scarlett has been gushing over Ashley Wilkes (Leslie Howard), a gentleman of such urbanity that he never falls from the pedestal of romantic ideal she has placed him on, ravenous as she is with all her love coaxing. Ashley is blond and impeccable in polished boots and confederate uniform, an upright southern dandy, the opposite of Rhett who, with the physique of a stevedore and a grin indicative of a sailor’s lust, is the match that ignites Scarlett’s temper. In every scene together, Rhett and Scarlett are at each other’s throats… he jibes her for the scheming nature beneath her demure façade… but the two are more alike than different. They both luxuriate in the niceties of well living, and whenever she’s in a fix, he appears as a guardian angel to save her. The burning of Atlanta, financial challenges, the strains of a fledgling lumber business… Scarlett could not have survived these without Rhett. They belong to each other. And yet, she constantly sighs, “Ashley! Oh, Ashley!” When the object of her pining crumbles to pieces upon the death of wife, Melanie (Olivia de Havilland), he displays a weakness so off-putting to Scarlett that she realizes just then that between the soldier and the scalawag, the latter – Rhett Butler – is the real man. The illusion of a girlhood crush at last dissolves, but it’s too late. Or is it? 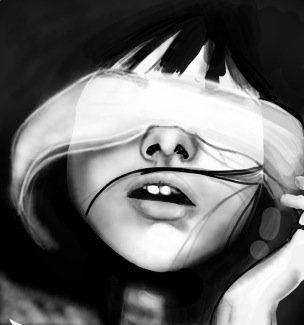 Tomorrow is another day. This is why “Gone with the Wind” has to end the way it does. We are fools when it comes to love. Love could stare us in the eyes and we wouldn’t see it, our sights on the wrong person. If the one whom we chase after can’t feel the same about us, then it’s not meant to be. The message can’t be any clearer than that. Still, we chase; so blind are we. What is it we want? The hurt of being spurned can’t be worth anything. Maybe we need to own to satisfy the ego rather than the heart. Scarlett has always gotten everything she wants, from a corset-induced 16-inch waistline to the rebuilding of Tara, the family homestead, to greater opulence. She has admirers who genuflect before her and is a virtuoso in the craft of flirtation.

Now here is Ashely, as spotless as porcelain and whom she can’t break. She keeps trying. How she keeps trying. Scarlett nearly succeeds when Ashely is on furlough. Before he returns to the front, he has one request of her – to watch over Melanie. She pleads him to kiss her, at which he responds, “Oh, Scarlett. You’re so fine and strong and beautiful, not just your sweet face, my dear, but…” He finally slips, but he doesn’t fall and runs off instead into the uncertain future of the Civil War. This near surrender to her feminine wiles is enough for Scarlett to go by. Maybe tomorrow she’ll succeed in ensnaring Ashley. Maybe tomorrow she’ll win Rhett back. Never censure the power of illusion. Often, it is the only relief we have to face the next day. Every morning offers the possibility of a pleasant surprise, even if the surprise is over a decade down the road. Nobody could have predicted that when my sister and A.K. had a falling out during her graduating year at Columbia University that they would reconnect some 15 years later, both of them now divorced from their own spouses. To add to the surprise, they would meet again at the wedding of the man over whom their relationship had ended.

I became friends with A.K. when he and my sister had still been on good terms, on a summer visit to New York when I was 16. He was a foreign student from India studying engineering, and he described himself as a nerd who, before meeting my sister, would wear white button-down shirts with pens in the front pocket. My sister had boosted his self-image with a fashion make-over so that he now dressed in parachute pants, shirt collars pulled up, and padded shoulders, the whole 1980s shebang. A.K., in return, was academically supportive of her in matters that involved numbers. (She was an art history major.) The two met at a time when one was the right person to help effect a potential in the other. Of the reward of being linked to my sister, A.K. said, “When we walk down the streets, people would look at her, then turn to me to see the guy she’d be holding hands with, and they’d be surprised to see that someone like her could be with someone like me. But it’s more than that.”

Whatever more they shared had been curtailed by the time I returned a year later for another summer in New York. It’s true: three is a crowd. Fortunately, Jason has been with my sister over the long haul, and even though marriage to each other was not to be their fate, they have established an affiliation as friends and business partners. In the meantime, A.K. had taken up with Cathy, a friend of my sister, who told me that A.K. with her was not the intellectual or emotional stalwart he had been for my sister. “He compares me to her. Why can’t you be pretty the way Anna’s pretty? Why can’t you be smart the way Anna’s smart? Why can’t you walk the way Anna walks?” A.K. was stuck in a relationship that no longer was. Illusions. We don’t all need to be women to have a Scarlett O’Hara in us; everyone, at some points in life, wants for something that isn’t coming back. While illusions can be victual for hope, channeled unfairly, they can be deleterious, which is why A.K. and Cathy were a mismatch and why, when Scarlett sees Ashley for who he really is, she’s in a wretched chase after Rhett.

But often we need to bungle in order to understand how illusions, when seen in the context of reality, can turn into a force that we call hope. No matter the schism between my sister and A.K., they own something that was built on trust and reliance, so that it could have been destiny that Jason, who was no longer a beau to my sister, would run into A.K. on a street in New York only weeks before the former’s wedding, where he then informed the latter that my sister would be a guest and so he should come. Thus, a relationship between my sister and A.K. was revived, with both spending a week at a tennis camp and touring brownstone condos A.K. hinted at purchasing as their home. Although they are not together in the way a typical romance movie would have them be, their reconciliation has lifted the cloud that for over a decade darkened their college memories.

This is why “Gone with the Wind” is a great movie. In addition to the technical and artistic achievements of cinematography, directing, and acting, the movie is an extravaganza of sunny days. When Scarlett O’Hara, in rags and hair in disarray after laboring in heat and dirt to restore Tara, grovels over a turnip like a hungry dog, only to rise to her feet and declare with fist raised to the heavens, “As God is my witness, I will never be hungry again!” the setting sun blazes the sky in red and orange. It’s the same fiery dusk when she looks at the expanse of land on which a glorious Tara now stands, into a tomorrow in which Rhett Butler will grab her in his arms with the vigor of a kiss-smothering brute. These thunderbolt moments have to happen at the end of the day, in the smoke of cannons blasting in yonder and in the shadows of birds nesting in trees.

Each sunset promises a sunrise.