In 1981, I hardly went to the cinema. Betamax was the rage in the Philippines. Every neighborhood had a betamax store that delivered film cassettes at your doorstep within thirty minutes of phoning for a title. Since most of the foreign films were not yet released or not released at all, the cassettes were pirated; some were filmed by a video recorder snuck into a theater. You can imagine the quality – static lines across the screen, muffled audio, widescreen shots that resulted in characters omitted from view as dialogue was spoken. So you might assume that my sitting through “Tess” (1979) was a drudgery. It was. I spent half the time rewinding a scene to catch the dialogue and adjusting knobs for a widescreen shot to be condensed, often to no avail. Nevertheless, I had been compelled to watch the film due to a single image that had seduced me when shown at a televised airing of the Academy Awards ceremony weeks earlier: Angel Clare (Peter Firth) gazing with ardor into the eyes of Tess D’Urbervbille (Nastassja Kinski) as he carries her over a puddle, the world surrounding them an explosion of sunlight and vernation and violins and bass.

I was 14 years old. The TV was in my parents’ room, and so both my father and mother happened to be watching “Tess” with me. My mother was especially upset that I would rent an R-rated film. “Why do you like films like that?” she asked. She must have been expecting something akin to “Lady Chatterley’s Lover” (1981), which features softcore starlet Sylvia Crystal in many scenes of erotic arousal and which I would later rent. My response: “It’s a good film. It was nominated for an Oscar. What do you expect me to watch? Disney cartoons?” I made no mention of the actress. I neither knew her name nor did I remember her face from the clip presented at the Academy Awards. All I remembered up to that point was the spring backdrop, the longing in the eyes of the lover for the beloved, and the theme song as dramatic as the rumbling of the earth.

My mother’s disapproval of the film and my unfamiliarity with the actress would change within minutes. When Nastassja Kinski occupied the screen, whether in close-up or in distant shot, she dominated it. How to describe her visual impact? My father said it best: “She looks like Ingrid Bergman.”

My father was not alone in his comparison of Kinski to Bergman. The New York Times film critic, Pauline Kael, herself bestowed that compliment onto the actress. Director Roman Polanski no doubt must have seen the resemblance, too – the sensuous pout and noble nose, the dignified carriage and eyes that oscillate between pride and vulnerability. For all the tragedy that permeates “Tess,” Polanski manages to create a work of tenderness and subtlety. In every frame you get the impression that he is making love not only to the story’s heroine, but also to the actress who is personifying her. He is paying tribute to a beauty so startling that Kinski drew comparison to yet another actress of inimitable stature: Greta Garbo. Before you conclude that Kinski was nothing more than a pretty figure, bear in mind that she was 18 when she filmed “Tess.” For an 18-year-old to play a woman who is impoverished, raped, impregnated, loved, rejected, scorned, kept, entrapped, and sentenced to death at the gallows for murder takes more than a visage of photogenic perfection. “Tess” is one helluva heavy drama, yet with what grace Kinski carries the burden of such woes. There are tears, but no histrionics. There is emotion, but no sentimentality. The most climactic moment is the quietest. Tess – dressed in a gown the red of fury, blood, and passion – rises from a slumber on a Stonehenge altar, a sacrificial lamb resigned to her fate. The sun lights the sky. The gendarmes close in on her. Angel Clare, hair as curled and golden as that of a cherub, begs the gendarmes to allow Tess peace. But Tess is already at peace. “I am ready,” she says, her voice lilting with the softness of a morning drizzle.

Tess D’Urberville is free at last from the curse of beauty.

Nastassja Kinski starred in other films of note – “Cat People” (1982), “Unfaithfully Yours” (1984), “Paris, Texas” (1984) – but with the exception of the last of the aforementioned, none did her justice. Too exotic, too European, and too anachronistic, she was best in the period piece that made her a star. She wanted to play Evelyn Nesbit. The project never materialized, which is a tragedy in itself. She would have been magnificent as the turn-of-the-century femme fatale who drives a man to insanity and then murder. For the rest of Kinski’s career, roles in which she would have been perfect constantly eluded her. The actress deserved more than that, she who possessed a loveliness that inspires art and an emotionality that weakens hearts.

Where Hollywood fell short, fashion magazines compensated for; Kinski was a photographer’s muse. She made a big splash in a Richard Avedon photograph that featured her as Eve surrendering to the serpent’s kiss. That image hung as a poster on my dorm wall during my freshman year at Tufts University. I spent a total of $75 on the poster and the framing – an extravagance well worth it. I lived on the ground level, and the poster hung at an angle from the window so that it was visible from across the lawn. In the evening, I would direct my table lamp at the image so that it shone like a jewel-encrusted mosaic. Through 30 years of traveling, I have lost “Nastassja Kinski and the Serpent.” I recently searched for a replacement on the internet and found one, but it is beyond my budget. 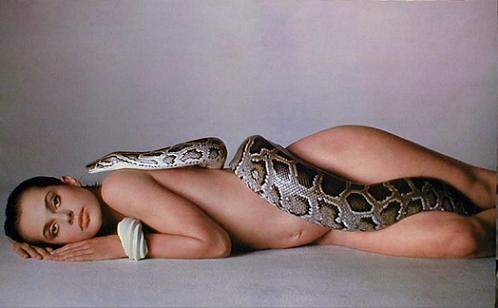